Ember projects and addons generated with ember-cli come with a .travis.yml configuration out of the box, so it’s clear why TravisCI has become the default for most Ember projects. I, however, became quite fond of CircleCI while using it at my last employer. It has a great dashboard UI and a generous free tier, especially for open source projects.

After CircleCI 2.0 became generally available last summer, I transitioned our Ember app at $EMPLOYER over to it and found that the new version really had some interesting benefits for our project. While I’m not at liberty to share the details of the $EMPLOYER project, I thought it would be interesting to revisit some of the things I learned then and make some general recommendations for using CircleCI with Ember applications and addons.

I have a simple Ember application that I use for experimentation that is open sourced at rebase-interactive/gitzoom-web. I’m going to use that project to iterate on a CircleCI 2.0 configuration.

First, I adapt the default .travis.yml that gets generated by ember-cli into an equivalent single-process configuration for CircleCI 2.0:

While this gets my project building on CircleCI 2.0, it’s not really taking advantage of any of the features that make CircleCI 2.0 so interesting. I’ll improve things by caching my installed dependencies next.

Caching in CircleCI 2.0 lets you reuse the data from expensive fetch operations from previous runs of a job to speed up future runs of that job. To cache the contents of my node_modules directory between test runs, I add two new steps surrounding the installation of my NPM dependencies: save_cache and restore_cache.

It’s possible to also cache the full source code of a project, which may be beneficial for larger projects. When project source has been recovered from cache, the checkout step will perform git pull instead of git clone. For smaller projects like this one though, git clone is often faster than restore_cache.

CircleCI 2.0’s workflow feature lets me break up the build into smaller parts, each of which runs in its own isolated container. If one job in my workflow fails, I can rerun just the failed job instead of having to run the entire build over in its entirety. I can also define which jobs depend on which other jobs, which lets me parallelize parts of my build that are able to run independently from each other.

There’s a lot going on here, but I’ll try to break it down a bit at a time.

The result is that each job runs independently of the others and in the order defined by the workflow (with deploy_production not shown as this build was not run on master):

While branch-based job filtering is fairly straightforward (jobs run on all branches by default and filtering is only necessary to limit branches), tag-based filtering is a bit more complicated. By default, workflow jobs do not run on tags at all. This means that if I want my deploy job to run only when I’ve tagged a release, then I must modify the workflows portion of my configuration:

Once I begin breaking my CI builds down into smaller pieces, a number of other potential use cases become apparent: 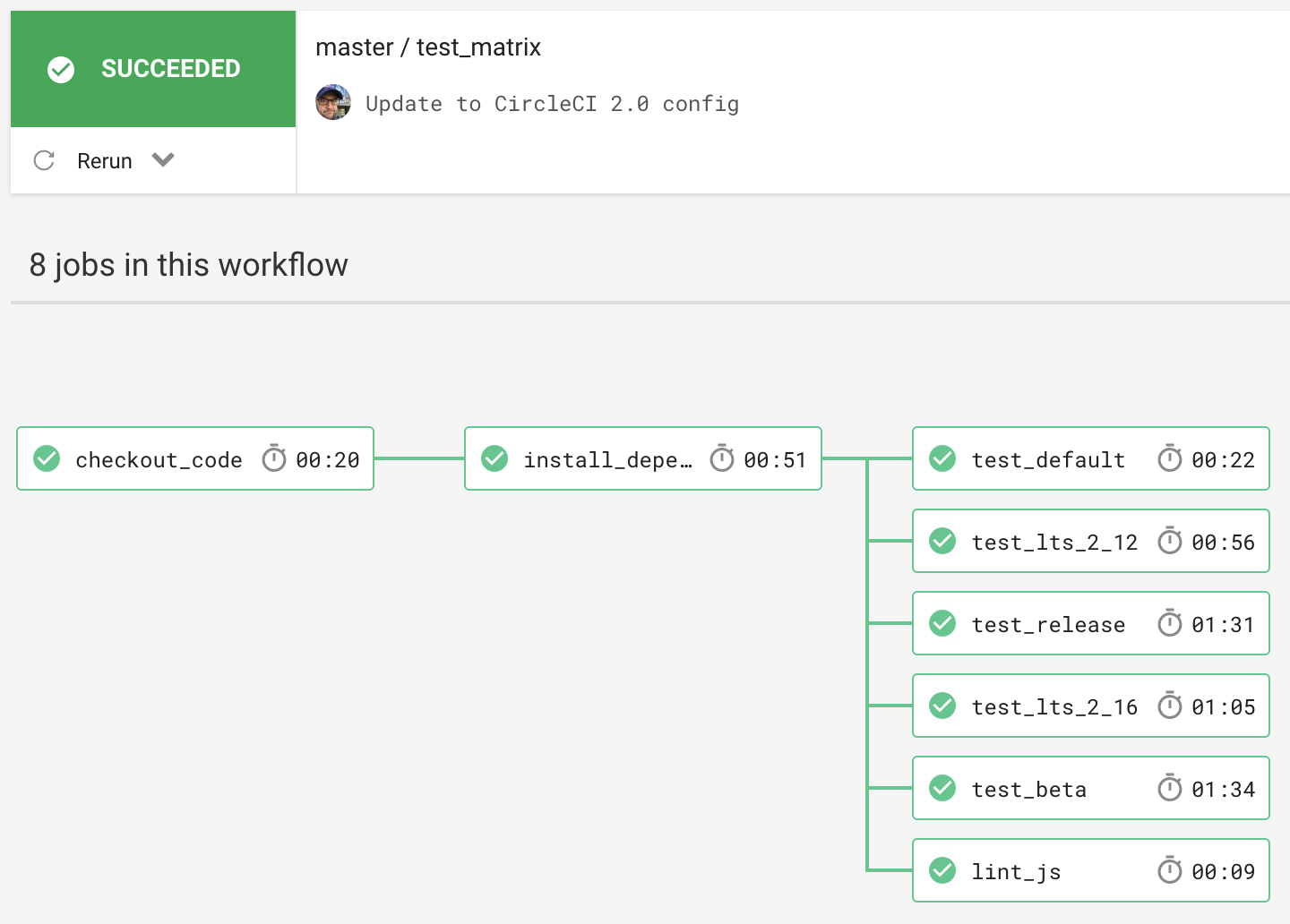 If you try out CircleCI workflows with your Ember application or addon, I’d love to hear what other ideas you come up with!

Like this post on CircleCI workflows and ready to get this sort of workflow working with your own codebase? 201 Created has worked on dozens of apps with Fortune 50 companies and Y-combinator startups. Visit 201-created.com or email hello@201-created.com to talk with us.